With the summer quickly drawing to a close, Jeff is anxious to do more riding. Our annual end-of-July NY trip, which we planned on doing by bike for the first time, ended up being a car excursion when he discovered a slow leak in the rear tire the night before departure. The tire was repaired on August 9, sooooooo....

I wasn't expecting an out of town trip for this past weekend until Friday afternoon, and the destination was not chosen until Friday night. But Jeff always has a few possibilities mapped out, just in case, and so Friday night we sorted those and picked Yorktown.

What a wonderful choice! Williamsburg and Jamestown steal all the thunder as historic colonial era towns in this part of the country, but Yorktown has as rich a history, a beautifully preserved town, and a beach!!

As usual, we did not go there directly. Our meandering route took us through some old favorites and new discoveries. We traveled through part of southern Maryland (although not the most southern parts) and across to Virginia at Route 301, and then wandered the Northern and Middle Neck before arriving in Yorktown.


Montross is a town we've passed through several times and always think "one of these days we should stop."  It's not much more than a bend in the road with some cute shops and places to eat. Not sure there's anywhere to stay overnight. But one of these days ...

A geocache brought us to Westmoreland Berry Farm and its wonderful goats, lunch and drink venue, and country store. The lack of space on the bike saved us from coming home with a blackberry pie. But my mouth is still watering at the thought. 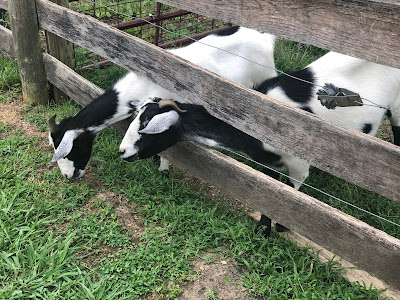 Reedville is just absolutely charming and this time we did a fly-by of the Reedville Fisherman's museum.  We still haven't explored the tiny museum in depth, but this time we stopped and looked at the boats (and got the "passport" stamp). It's been a long time goal to have lunch there, but the restaurants on the water never seem to be open (or in business) when we're there. A reason to go back! 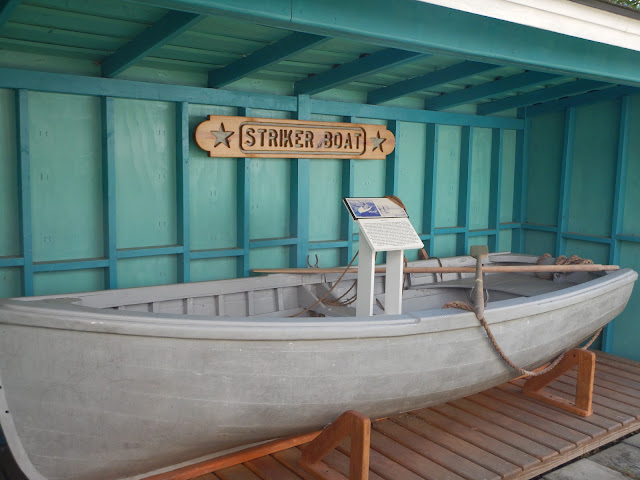 Urbanna was a deep water point, important for commerce in the 1700 and 1800s. Nowadays, its tourist draw is a historic road and a museum.  Its charming but modestly sized museum (2 rooms) has the most amazing map! This John Mitchell map was created in 1755. It depicted the eastern US with marvelous annotations such as "full of buffelos" in one of the more western areas shown (probably present date Missouri). It was considered one of the most accurate maps for its time and was relied upon extensively. No pictures of the map, unfortunately. It occupies an entire wall of the museum. You'll just have to visit it yourself! 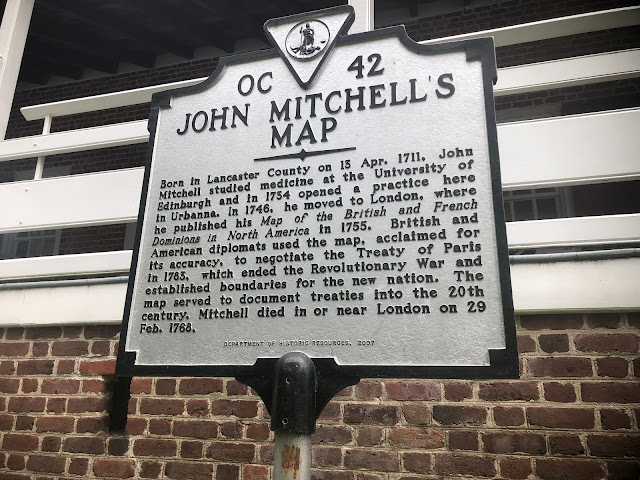 Gloucester VA was a new discovery.  The circle in the middle of town has a number of historic buildings, intact, as well as the visitor's center (below). The town has sculptures, several of artists, scattered about. Overall it has a nice arts-boutique-lunch vibe. We hadn't intended this to be a stop, but we did a quick stroll through the circle and down the main street. And watched several of these stunningly striped hummingbirds cruise the gardens. 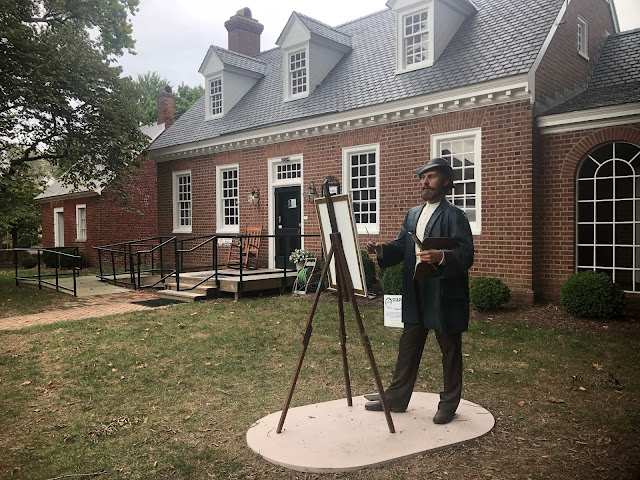 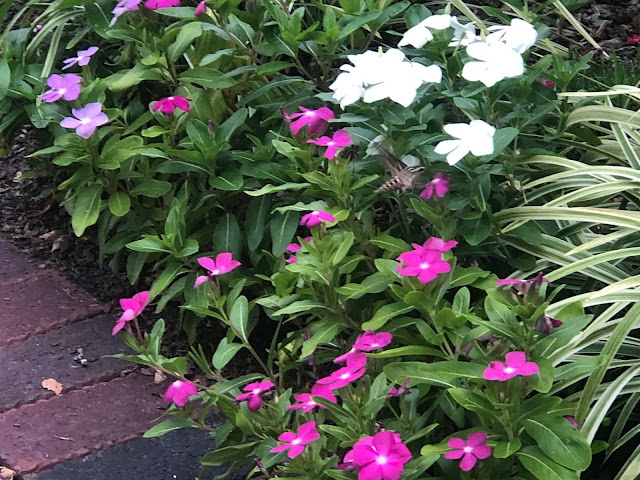 And Yorktown!  Situated on the York River, the town found its beach front periodically ebbing and flowing as storms and the current added and removed sand. So it installed breakers that create a series of scalloped beaches -- very cute and apparently effective. The sand and water were crowded with families, couples, and groups, playing and picnicking and just generally having a wonderful time.

Jeff had picked the Duke of York as our hotel, which was perfect. We were right in the middle of the "strip." From our so-called "fourth floor" room (the first floor of the building up the hill from the building with the first three levels) we had an excellent view of the river. Leaving the hotel, we walked past several buildings to have dinner at Yorktown Pub, which was busy but seated us quickly. The food and craft beers were excellent.  Then we walked further in the same direction (SE) to examine Cornwallis' cave. Turning back toward town (heading NW), we followed the beach past two venues that were hosting weddings and another with a very loud band. We checked out the windmill (a replica of one that used to be in the town), and then walked back to our hotel and popped into Larry's, the bar next door, where we sat outside and watched the parade of folks going by while enjoying another round of craft beers. 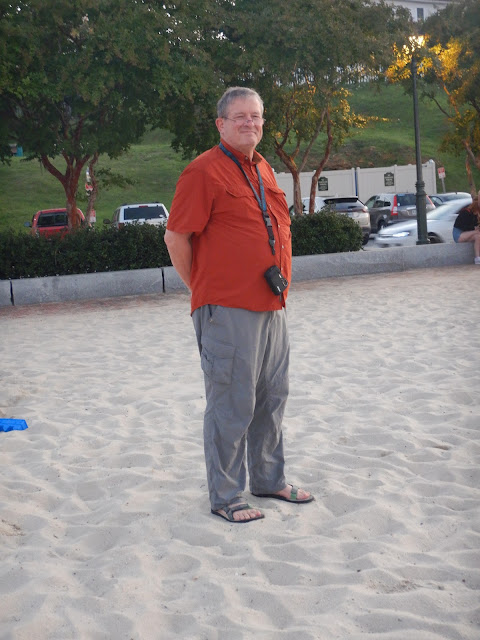 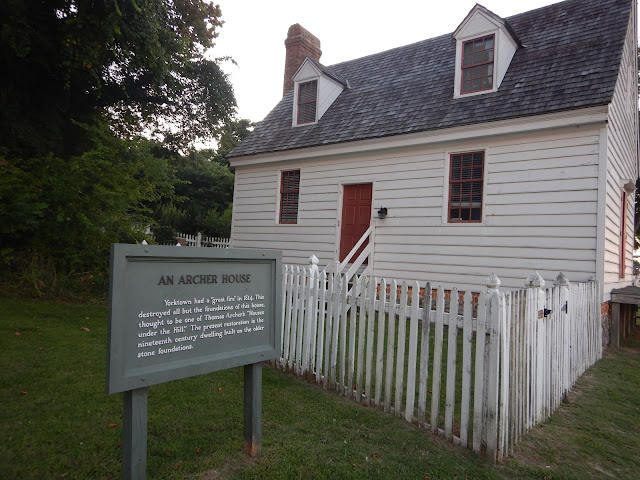 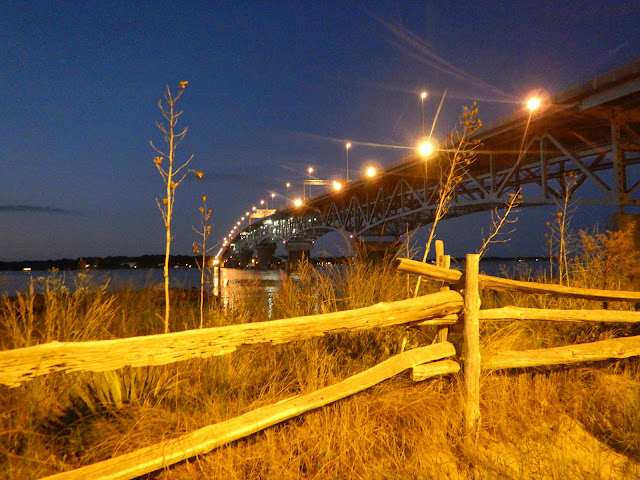 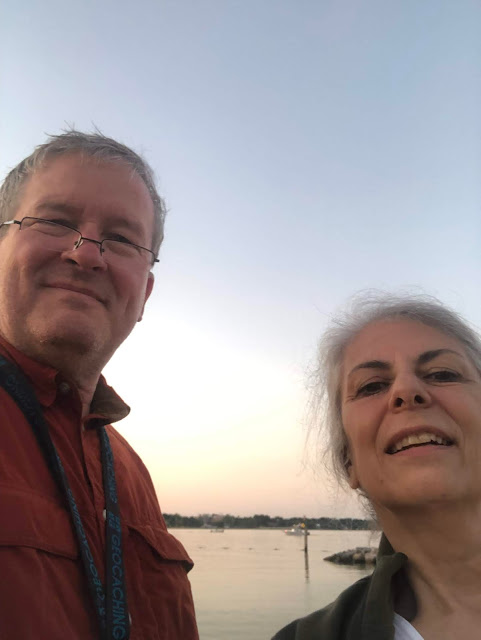 On Sunday morning, after breakfast in the small restaurant at the Duke of York, we rode through the historic town center and stopped at a small cemetery. Then we headed out to the Visitors' Center near the battle fields. The museum has portions of two of George Washington's tents! They were preserved by his grandson, then passed into the hands of Robert E. Lee's wife, who left Arlington House in charge of a trusted slave when forced to evacuate, who protected them until they were turned over to the government for safekeeping. The diorama and reenactment costumes were made in the 1930s by the Conservation Corp workers. Altogether, very interesting.

Of course our journey home was not direct either. We captured several ToH and States of Confusion bonuses (two of this year's scavenger hunt events).

One of the highlights was our stop at Fort Monroe National Monument. This fort-turned-NPS site has an extensive museum and extraordinarily wonderfully preserved buildings. Don't miss the pet cemetery that lines the upper rampart. The town around it has the order of a former military post, but all the charm of a southern coastal village. There is at least one huge, historic hotel on the water. The still-working Old Point Comfort lighthouse, perched between two houses on a residential waterfront street, is very picturesque. 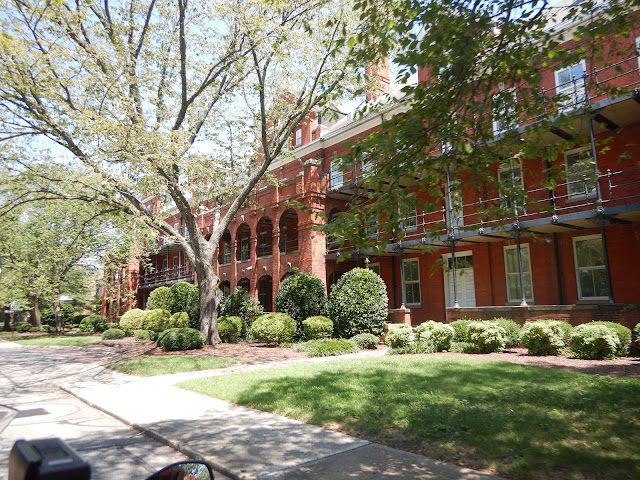 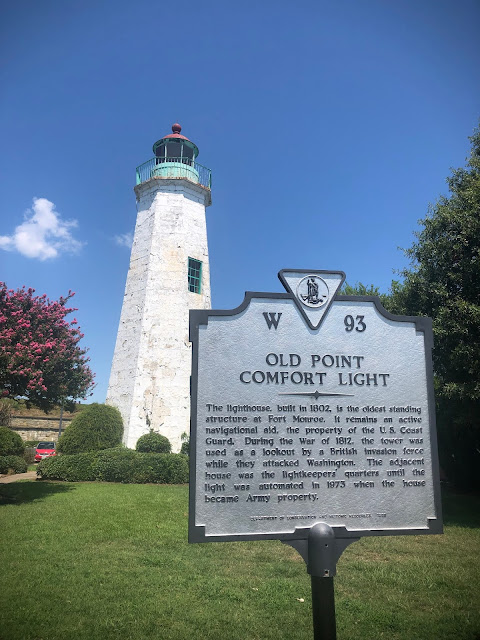 In our meanderings out to Engineer's Wharf, we met a woman from Pennsylvania sitting on her Victory, who told us she was on her longest solo ride to-date. We congratulated her and referred her to LD Rider's FB page. The wharf itself was lined with fisherman, including one using the sink and cleaning area to fillet his catch.

We had lunch at a wonderful little corner cafe called El Korita in Suffolk and then headed home via highway. Traffic on I-95 was absolutely dreadful, so it was a very long, slow, ride. But we had a safe and fun ride, and made more great memories.

Posted by OnJeffsBike at 8:22 AM No comments:

OnJeffsBike
Washington energy lawyer who likes to travel meets long-distance motorcycle rider who likes adventure, and the rest is ... a blog.